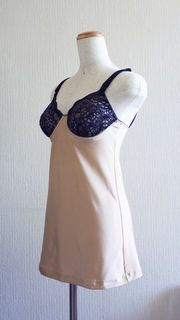 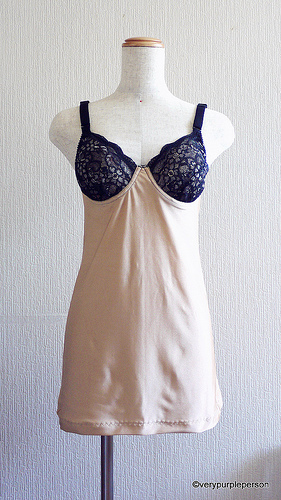 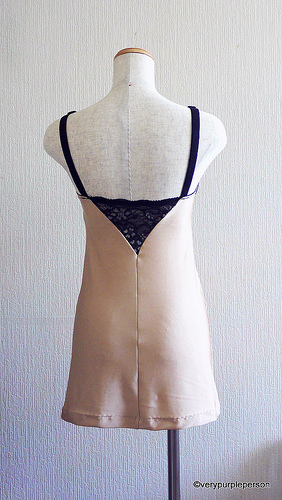 In spite of the lack of the sewing posts in this blog, I’ve been sewing a lot lately but never really got the chance to post them. During summer holiday, the house is always full of Sidra’s friends. They have recently found Minecraft, which means that I can’t use the computer during the day. But now the summer holiday is over and the computer is mine again!

This is a slip that I finished sometime ago. I’ve been wanting to have a proper slip to wear under some of my dresses. The pattern is Merckwaerdigh O2, the description of the pattern: Pattern O2 from Dutch design Merckwaerdigh with a lovely underwired bra-shirt and a close fitted slipdress. Comes in sizes S till XXL for the slipdress and for the bra-shirt.

I made the bra-slip one, Sarai from Colette has made the same pattern in this post. My slip was made with lycra in nude colour, black lace with nude accent for the cups, and black lingerie notions (elastics, straps). The lower cups are lined with nude non-stretch lining.

To make the bra in my size (28F), I reduced the side seams on the side of the cups and tapered it down to the waist. I also lengthened the slip a bit so it would cover my backside.

As Sarai has mentioned, this bra-slip is not as supportive as a bra due to the lack of band. I don’t think I would do some running around in this slip, so this is fine. Maybe in the future I can add a separate band to the bra but I would have to think about the construction first. 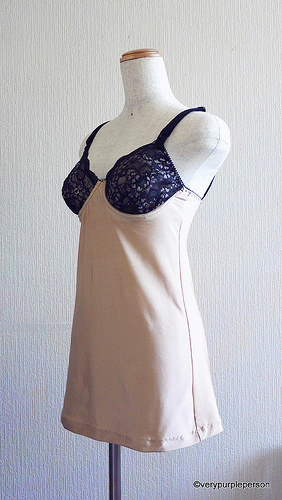 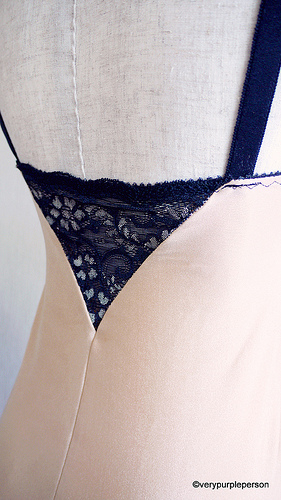 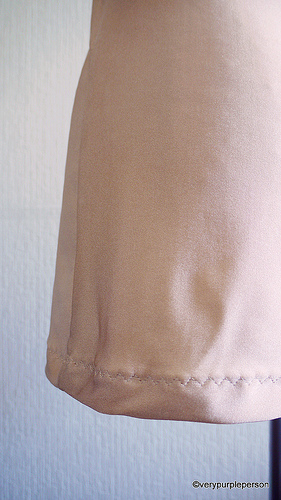 I added a piece of non-stretch lining to the bridge part so it won’t stretched out. I imagined that the back should be able to stretch out but the front should not. The hem was simply folded over and topstitched using 3 step zigzag stitch. A better finish could be achieved with coverstitch function on my overlocker but I was just too lazy to change all the threading. 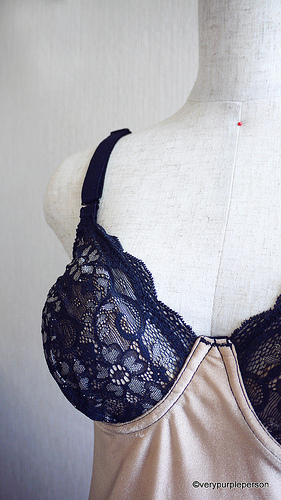 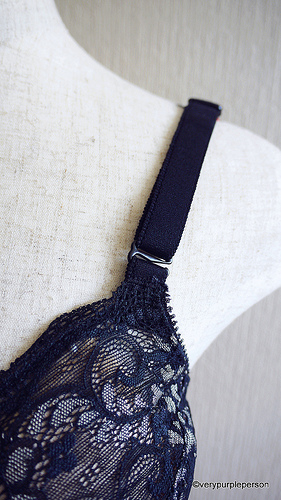 I’ve been wearing the slip under this summer knit dress and it is quite comfortable. Usually I have to wear a bra first, then a slip over it before wearing the dress. It means 3 layers, which is not really comfortable during summer. Now it is only two layers. Next time I should make this slip again using bamboo jersey or cotton jersey for more comfort.

And do you notice my new friend there wearing the slip? I finally bought myself a dress form. Nothing fancy though, it is just a cheap one bought online. In these pictures, the bust is stuffed with foam cups and fibrefill. The waist and hip are quite small too, I plan to use padding around the dressform to make it more my size. It will be an interesting project!