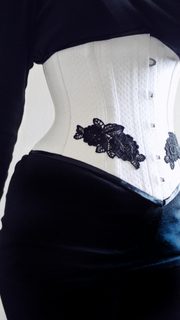 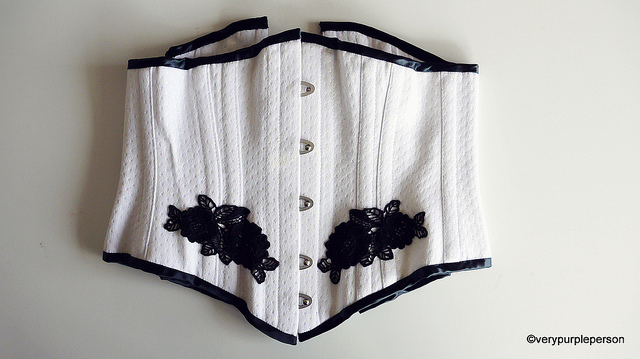 I finally finished my corset! It’s not perfect but I’m quite proud of the result. The corset has black satin binding, handstitched lace on the front, and black round cord lacing. I’ve also added a back modesty panel using Electra Design’s technique. 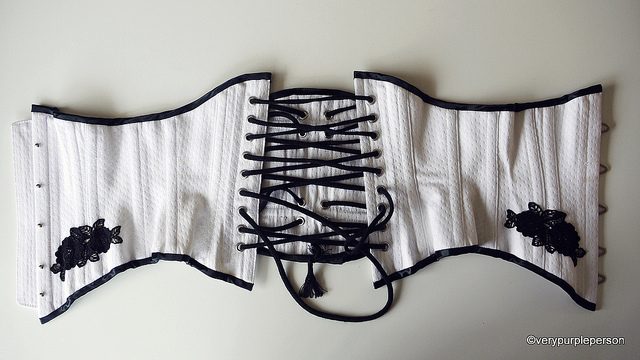 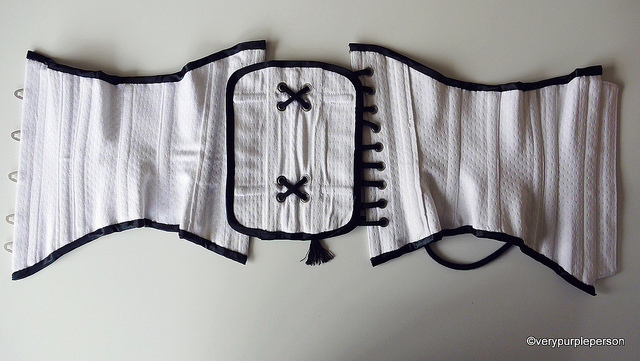 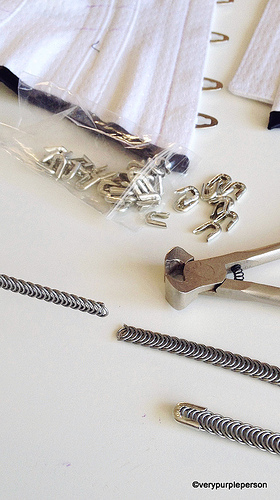 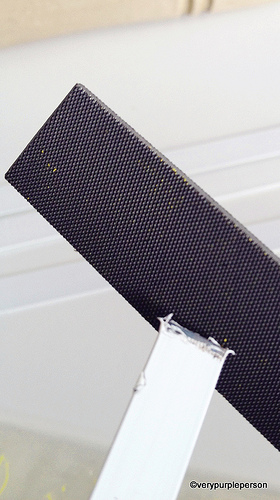 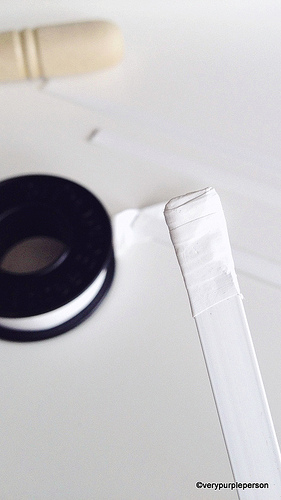 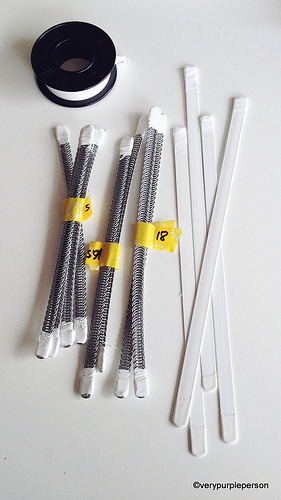 I cut the continuous spiral steel bones using wire cutter. This turned out to be much easier than I thought. The spiral shape allowed me to only cut the outer wire on both sides. Then I attached the U-shaped end caps using pliers.

Since I have shortened my underbust, I had to cut the flat steel bones as well. I bought additional flat bones as the Sew Curvy kit only had 4. Cutting this flat steel bones is much more difficult than the spiral steel ones. I had to try several times before they snapped. The exposed cut part was then filed to make it rounder, then wrapped in plumber’s tape. I also wrapped the tip of spiral steel bones in plumber’s tape to keep the end caps in place. All the bones are cut 2.5 cm shorter than their channels. 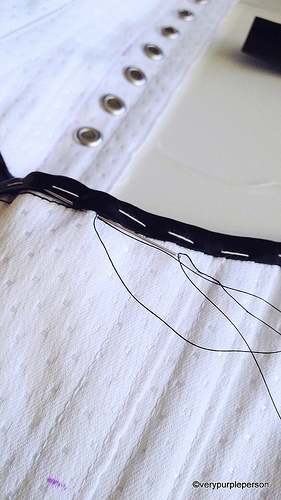 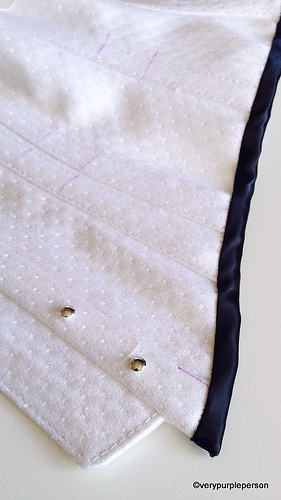 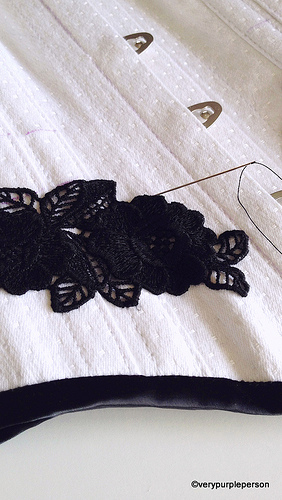 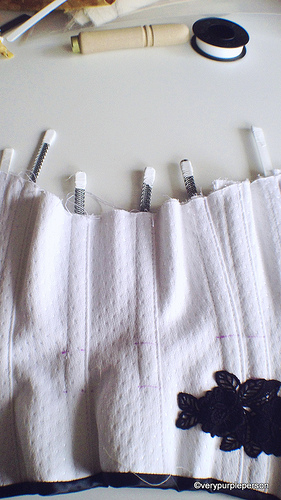 Before inserting the bones to the channels. I bind the lower part of the corset in black satin binding. I didn’t use the white binding from Sew Curvy kit because I want the corset to have more contrast. The binding was attached by machine first, then turned and handstitched to the other side. I also handstitched piece of lace to the front of the corset. Then I inserted all the bones in place and finished binding the top part.

Initially I used black ribbon for the lacing, but it was too slippery and couldn’t hold the knot. I couldn’t find black lacing similar to the one from the Sew Curvy kit but I found this round cord lacing. Unfortunately it was only 3 m so my ties was a bit short. It is actually used for making children’s lunch bag, the craft stores have lots of these right now because next month is the beginning of education year in Japan. 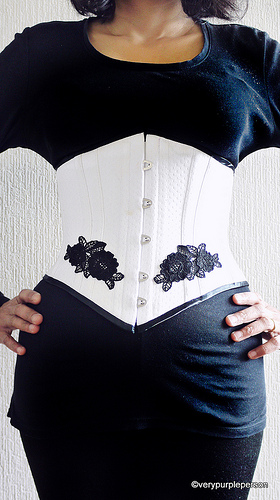 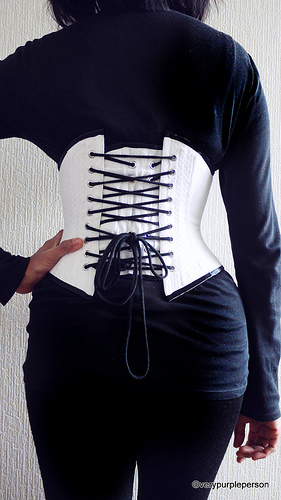 I put on my corset and tied the laces, carefully keeping a straight gap in the back. It was uncomfortable as expected, but surprisingly not as uncomfortable as I’ve thought. It just felt like a very tight hug. In fact I wore it for about 4 hours after that with no problem. When I took it off, I kinda miss the feeling of being held. I wore it again the next day for 4 hours and I happily noticed that it did help easing my back pain.

I don’t think I will wear this corset for going out though. The corset really makes good posture and accentuate all the curves (maybe too much!), but it also makes my boobs looks too prominent. Besides I don’t have a lot of clothing that can conceal the corset. I guess I will only wear this corset at home to help my back pain (usually before that time of the month). 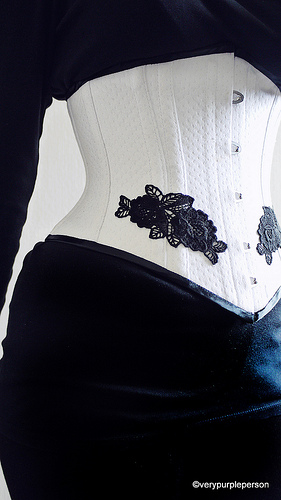 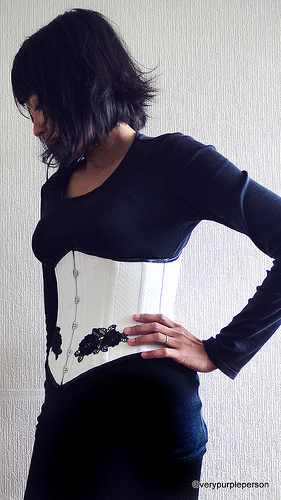 I have really enjoyed the process of making this corset immensely and keep looking for a reason to make another corset one day. But I realize that it is not something that I would wear a lot so maybe I won’t make another.  While making the corset, I learned a lot of techniques and also how to be more patient with my project. Not everything has to be finished in one afternoon! I also love love love looking at my corset, caressing it, and love how I feel when wearing it. This project also refreshes my sewing mood, you can see that I’ve made a lot of other things this month!