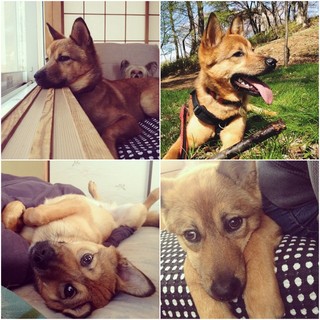 Shiitake finally found his forever family after more than three months in foster care! I was beginning to worry that he wouldn’t get adopted because he was so shy of strangers.

Shiitake was fine at home with us, but at the adoption events he would hide in a corner so nobody would see him.He befriended another foster dog called Hara, where he met when he sometimes stayed in another foster family. She was about the same size and age as Shiitake, and just as shy as him too. At adoption events they would crumple together and hide.

Then a family came to adopt Shiitake after seeing his profile on ARK page. When they saw Shiitake and Hara together, they fell in love with Hara and decided to adopt her too! It was quite a rare incident that two big sized dogs could get adopted together! When the girls from the family saw Hara, she was wearing a ribbon, so they wanted to give her a new name: ‘Ribbon’. It was such a great news for both dogs. From now on, they will be together forever.

Shiitake and Ribbon were brought by ARK staff to their forever family last week. When they arrived, they were greeted with presents and a welcome banner. Isn’t that so sweet?

Although I missed Shiitake but I’m so happy for both of them! He found the best family, and got to go there with his best friend. Congratulations Shiitake, thank you for all the sweet memories! Wishing you a wonderful life with many parks to run in and birds to chase!

Now that this chapter is closed, we moved on to the next one. This is Shoronpo the chihuahua! he is a 4-5 years old male chihuahua, found wandering in the park. Here is his profile page in ARK. You can see that he is very adorable!

His profile mentioned that he has some trust issues, but so far he hasn’t shown any problem. He’s very healthy, active, and curious. I think he will find a family soon! 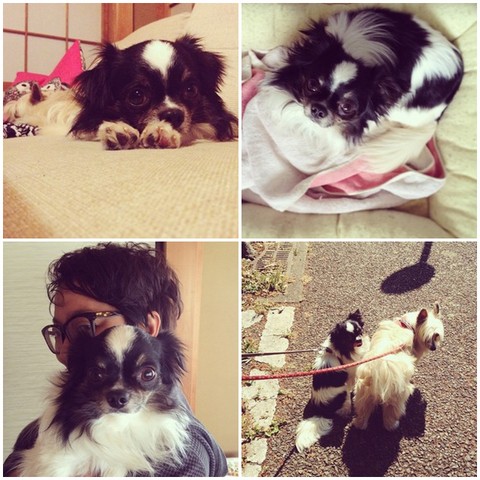 Here she goes again with the wriggling pet