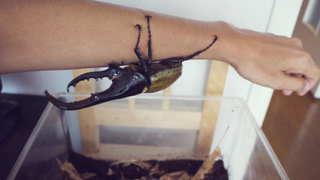 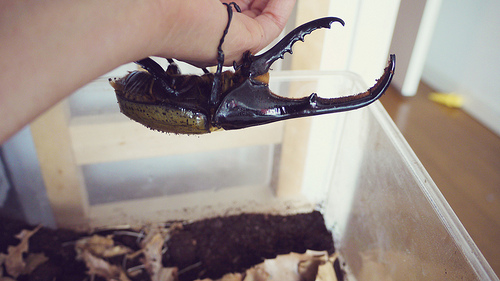 There were some crackling sound from inside our larva box when we woke up this morning. My husband peeked inside the box and found this huge beetle! After two years of waiting, our larva has emerged as a huge Hercules beetle last night!

I completely missed his pupa stage, which is in between the larva and imago (last stage development of an insect). In Pupa stage, he would stop eating and silently begin the metamorphosis process. This is the most delicate stage, so maybe it was a good thing that we didn’t disturb him at that time. The tip of the horn is a little bent, maybe because of his position during pupa stage. But he is huge! I haven’t measured him properly, but it seems that he’s more than 15 cm in length.

We asked Sidra to gave him a name and he said the beetle will be called ‘Redojiimu‘ (Red Jim). Red Jim? We asked him why? Sidra said, “No reason.” Oh, okay.

After Sidra and my husband left for school and office, I tried to take some pictures of Redojiimu. I put him on my palm so I could use the other hand to operate the camera, but he ran towards my arm! He then bit me when I tried to take him off. Don’t worry, his mouth is underneath those gigantic scissor-like thing, so it was only a bit warm and not painful at all. This beetle has serrated claws on the ends of his legs so they cling to my arm. It took some time to take him off and now my arm is full of tiny red marks.

Anyway, if you ever got the chance to have one of this thing clinging to your skin or clothing, don’t pull it off. It will just make him tighten its grip and you might hurt the beetle by pulling him off. Just pat gently on his back rear and he will move. 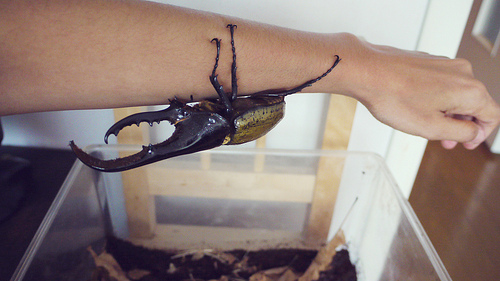 If you remember my first post about him, we bought him when he was just a tiny little larva in August, 2009. So it took almost two years for him to fully develop and got ready before transforming into a beetle. I feel happy and sad at the same time. After reaching adult stage, a beetle has only a few months left to live. A beetle spent most of his life underground eating and eating for several years. Then one spring, he transform and emerge as a beetle. This is actually the last stage of his life and he only eats very little. Then he will die before winter.

Sidra just found out that Redojiimu will die this year, he was very upset about it. But this is the life cycle of a beetle and we had the chance to experience it by ourselves. We saw him as a tiny little larva and now he’s a giant beetle. Transforming into a beetle is not the beginning of  a journey, it is a journey about to end.

When I think about it, it does make sense. That is why we never see beetles in winter because they all have died. Life is a funny thing. 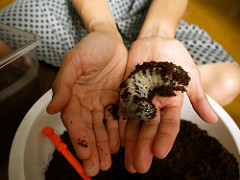