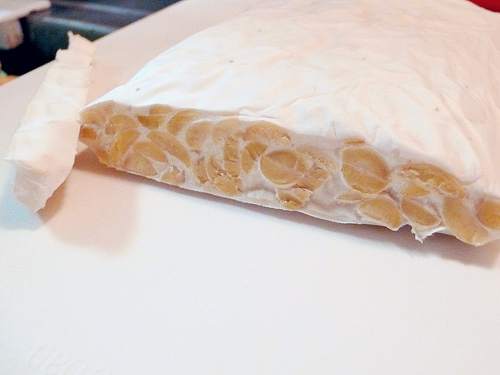 Now that the summer holiday is over and school has started again, I should have time to sew again! Unfortunately I guess the summer bug has got me, it is so hot in my sewing room upstair that I prefer to stay downstair most of the time. I’m trying to make a dress right now with tie-dye fabric from my mother but the progress is sooooo slow for such a simple dress.

Anyway I made something else. The hot temperature is actually perfect for fermentation! So I thought about trying to make my own tempeh. Tempeh is a fermented soy product, originally from Indonesia. It is high in protein, fiber, and vitamins. I usually deep-fried slices of tempeh after marinating them in garlic, coriander, salt, and water, but you can cook tempeh in various ways. It is even often used as a substitute for meat.

Sidra really likes fried tempeh and we often bought them from an Indonesian store in Shinokubo. But I always wanted to try making them myself so we can always have tempeh supplies at home. After researching my options (Google, of course), I ordered my tempeh starter from TopCultures, a company based in Belgium, which is pretty ironic since I was making a traditional Indonesian product in Japan.

I used the instructions on this page to make my first batch. Instead of 600 g of dried soybeans, I only used 300 gr and half of everything else.

The dried soybeans need to be soaked overnight before they are splitted and dehulled. I found this to be the most difficult part. Some people crack the soybeans before soaking, using a mill. Since I don’t have a mill, I had to do the splitting (not cracking anymore as the soybeans had become softer) by hand.

I kinda like it thought, it felt like popping bubble wrap! You don’t want to stop, and keep looking for more. Maybe it’s just me though. 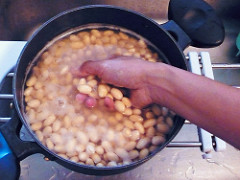 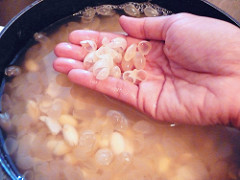 After all the soybeans have been splitted and dehulled, the vinegar is added and they are cooked for 30 minutes. Then they are drained and left to cool off before the tempeh starter is added and mixed together. The soybeans have to be completely cooled off because heat will kill the fungus. I used ziplock bags as container. They were perforated at regular intervals with thick needles to allow breathing. Then the tempeh are stored in a warm place (about 30°C) for 36-48 hours.

After they were stored for fermentation, I took a peek every hour to check the progress. The first 12 hour, nothing seemed to happen to the beans, only the bags felt a little warm. Not knowing what to be expected, I began to feel a bit worried. But 36 hours later, they were already covered in white mould! I couldn’t believe that I was able to make my own tempeh!

I took them out of the bag, sliced them, and fried them immediately. They tasted so good! Sidra was ecstatic when he tasted them. He said they were the best tempeh in the world! He is such a picky eater and often refused to eat meat because he felt sorry for the animals, so I’m very happy that now we have an alternative protein source other than meat.

The two bags of tempeh disappeared faster than I thought, we fried them, marinade them in honey and pepper and microwaved them, and added them to spaghetti aglio. There are new batches already sitting in my cupboard now. My husband helped with the new batches because he was curious. I guess making tempeh will become our new routine!