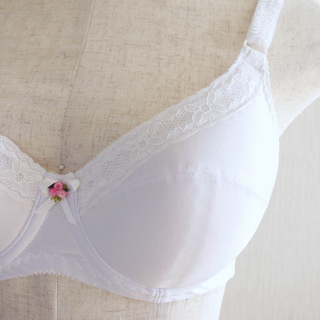 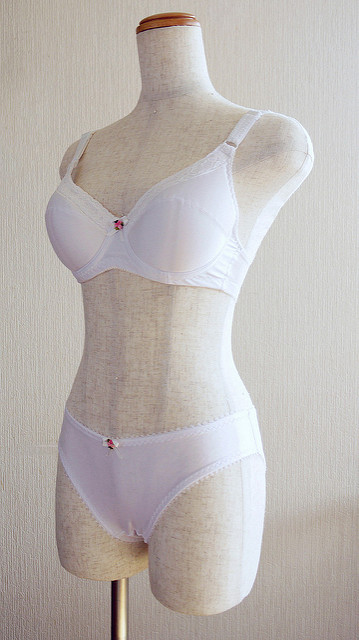 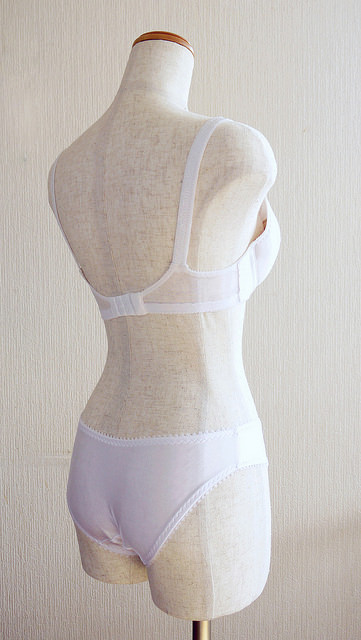 I just found out that a bra is not called ‘a pair of bra’! My apology if I was being confusing by talking about ‘a pair of bra’ and ended up just posting one. Where’s the other?! There are a pair of shoes, a pair of pants, and bra has two identical things on it just like shoes and pants, so why isn’t it called a pair of bra?? English is confusing….

Anyway… I recently made a new bra and panties set. They may look plain without all the colorful fabric and lace like my previous ones, but I’m so happy with this set because I drafted the pattern myself. I feel like going a level up in lingerie making now! 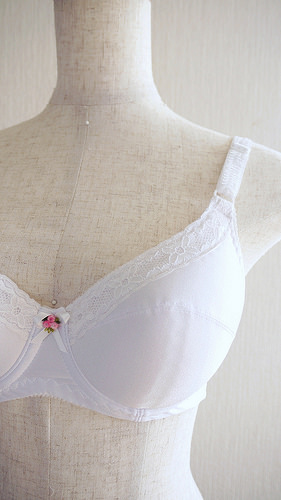 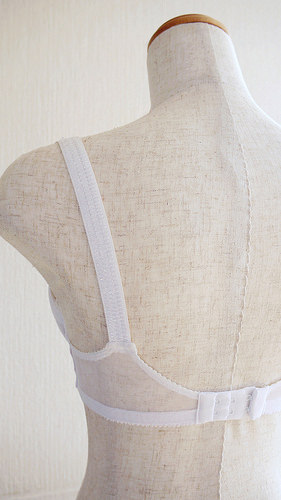 I used the book ‘Patternmaking for Underwear Design’ by Kristina Shin to draft this pattern. Thank you to Melissa of Fehrtrade that have brought the book to my attention, you can also read her wonderful review of the book in her post. If you love pattern drafting you will love this book!

The book has drafting techniques for basic blocks for bodice, skirt, and T-shirt; 6 bra patterns, 4 corsetry patterns, 4 panty patterns, 5 sleepwear patterns, and the last chapter for camisole, bodysuit, and leggings patterns. All your needs are covered!

A note to remember though -and maybe the most important one-, the bra and corsetry patterns are drafted for size 34B. If you’re in size other than 34B and  want to use this book, you have to be able to grade the pattern. I usually use size 28F or 30D which fortunately has the same cup size as 34B so I only have to grade (shorten) the band. The cups on size 34B has the same volume as the cups on size 36A, 32C, 30D, 28F, 26G.

The drafting techniques uses the underwire as a starting point. So basically you trace around the underwire and start drafting around it. I love this technique because it makes sure that my underwire wouldn’t be either too short or too long. For this set, I drafted the basic underwire bra and the brief patterns. The bra pattern will later be used as a base for the other bra patterns. 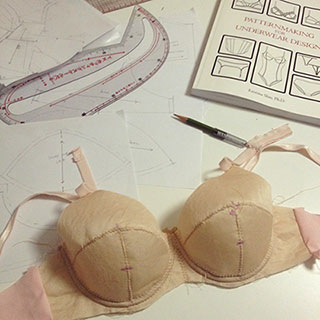 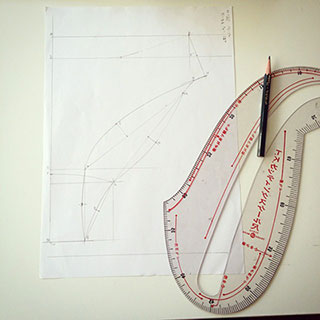 Here is a quick muslin that I made to test the fit of the bra. The foam lining of the bra is in 3 pieces while the outside layer is two pieces. After checking the fit, I narrowed the center bridge area, a common alteration for me. I notice mine are a close-set and bottom rounded pair.

I use foam lining from Makebra shop (my favorite foam lining!), and white lycra for the outer fabric. The band is power net and all other notions are from Merckwaerdigh store.

The inside seams on the foam cup are covered with strips of tricot binding. The outer layer has topstitching on either side of the seams. Initially I planned to make a plain white bra set but then I added a wide lace strips on the upper edge. Maybe plain white is too boring. 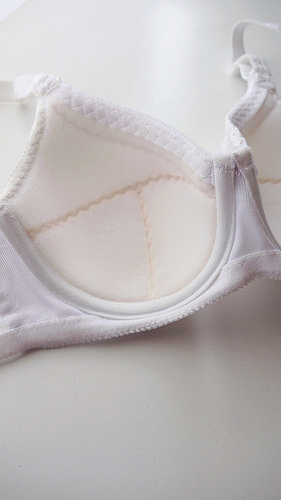 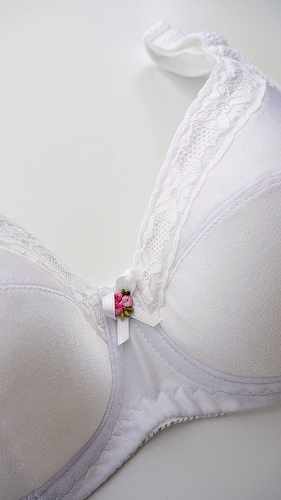 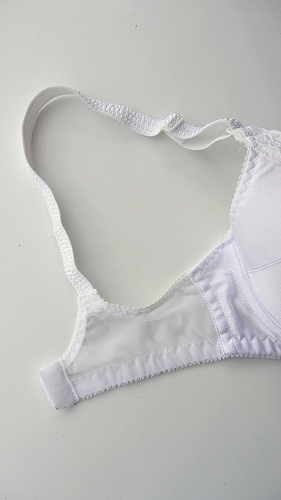 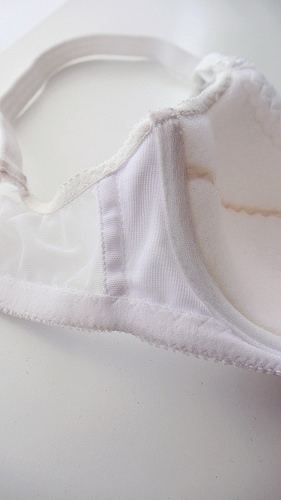 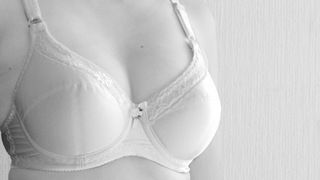 I love that the bra pattern creates a rounded shape that suits me, not as pointed as Pin-Up Girls patterns. But the beauty of drafting the pattern yourself is that you can create any shape that you want. Here is a washed out picture of the bra on me in case you’re wondering about the fit. Next time I will add some boning on the side seams.

The brief pattern creates a basic everyday panties that sits slighly below the waist and provides enough coverage around the back. Now I have two basic patterns that I can use as a base for the next ones! 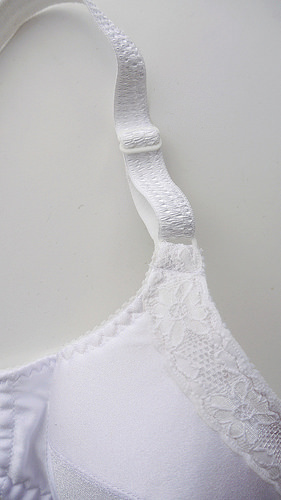 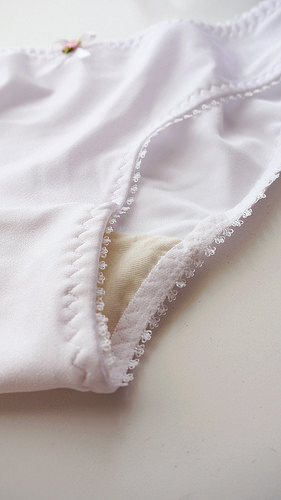 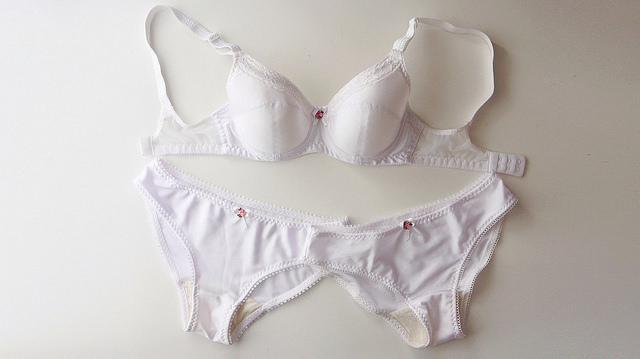