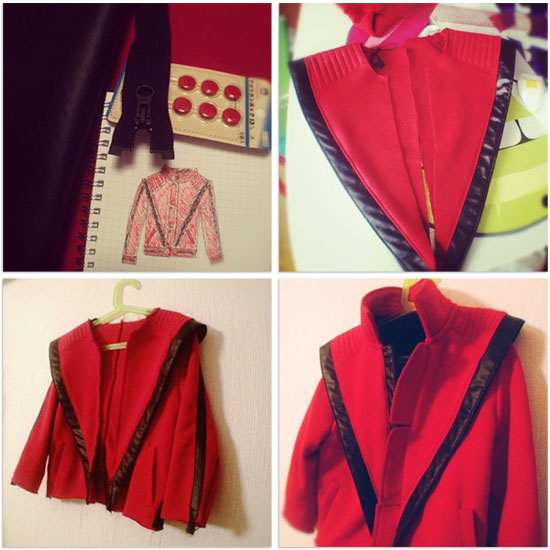 Can you recognize the jacket? And no, it’s not a Halloween costume for Sidra.

Recently I told Sidra that since the weather was going cooler, I would make him a jacket, then I asked if he had anything particular in mind. Maybe I shouldn’t have asked him first and just carry on making the jacket because -of course- he wanted a Thriller jacket.

Um, wouldn’t it be a bit costumey? What about a Thriller-inspired jacket with the same red and black combo? No, I want it to be exactly look like the one that Michael Jackson wore! You can change the insides but the outside has to look exactly the same. Owkay.

After an extensive research (= google) to study the shape and lines of the Thriller jacket, I began to look for a jacket pattern that I can use as a base. I finally use the Nectarine jacket pattern from Tamanegi Kobo, a Japanese pattern shop and alter it to make the Thriller jacket. This is another red and black combo jacket based on this pattern that I’ve made previously, unfortunately this cool jacket is now unwearable due to the growing speed of a child.

Making the jacket with leather all-over is a bit too much, so I use cotton jersey for the red part and vegan leather for the black stripes. The jacket will also has a zipper under those three flaps and black jersey for lining.

Sewing it turned out to be much more difficult than I thought! In fact, this might be one of the most difficult things that I ever sew. My sewing machine hates those thick layers and leather. Sometimes the sewing feet just stopped over the leather and refused to move. Maybe I should use a special sewing feet for leather. I’m sure there is such thing.

I also failed on making the single welt pockets, so those pockets are fake. I quite regretted it. Sidra tried on the jacket for fitting last night and instinctively tried to put his hands on the pockets. Note to self: a jacket has to have pockets!

The inside of the jacket was nothing to be proud about, but at least it looked fine from the outside. I still have to finish the cuffs, all those leather straps, and attaching the snap-on buttons. Sidra had been playing Michael Jackson songs everyday now, talking about no pressure!