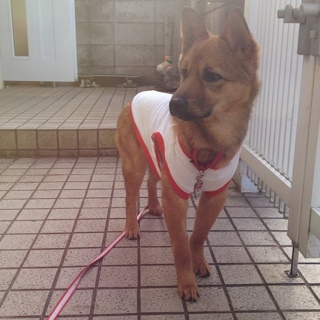 It has been more than 2 weeks into the new year but it is still January so I guess saying ‘Happy New year!’ is still okay. Well, happy new year!

This handsome pup just came to our house three days ago. he was born five months ago in a temple on the mountains by a stray dog mother. All the six puppies were rescued by the age of two months, they were hairless because of mange (skin disease) at that time. They were all named after mushrooms. You can read the story about them in ARK blog.

This one is called Shiitake, this is his profile page. He is gorgeous, smart, but extremely shy. The ARK shelter was hoping that Shiitake will learn to socialize with people and other dogs while he is in foster care. 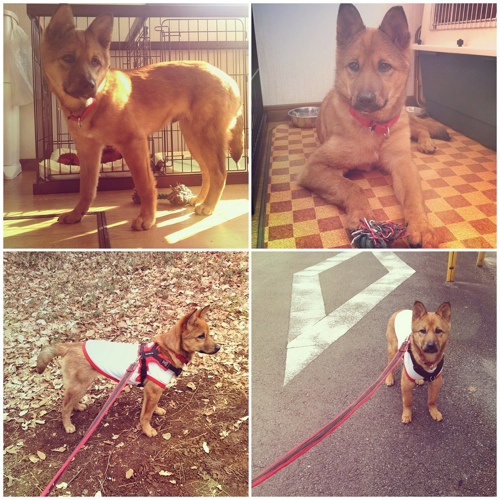 Because he was so shy and timid, Fuwawa is not as stressed out as she was with the previous foster dogs. I think it is a good way too for Fuwawa to learn living with other dogs.

Shiitake had never interacted with a child before so we were a bit anxious to see how he is with Sidra. It turned out that he immediately liked Sidra. Shiitake always flinched a bit when my husband or I pet him, but he didn’t seem wary when Sidra touched him.

He began to understand the daily routine during the first two days. In the afternoon he can’t wait to go to the living room to sit beside Sidra. He loves to play with Sidra’s feet, licking him and even putting his head on Sidra’s lap. Sidra goes to sleep earlier than my husband and I, and Shiitake goes with him. Here he is giving Sidra a goodnight kiss. 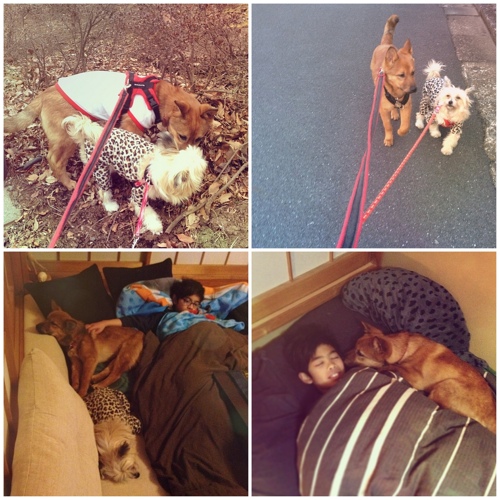 I think I began to get a bit too attached to Shiitake though. He is so sweet and absolutely easy to train. He doesn’t bark, doesn’t chew stuff other than his toys (how does he know what things are okay to chew??), he does his business outside, and he is very observant of things around him. With proper socialization, I think he is perfect for a family dog. Sidra said that he hoped Shiitake will get adopted as soon as possible, before they both get too atached to each other.

In the sewing department of our home, I haven’t managed to get many things done other than the T-shirt that Shiitake is wearing. I tried to cut a pattern for a jacket yesterday when Fuwawa decided that it was a good time to nap….

Happy birthday to me and a giveaway! – CLOSED