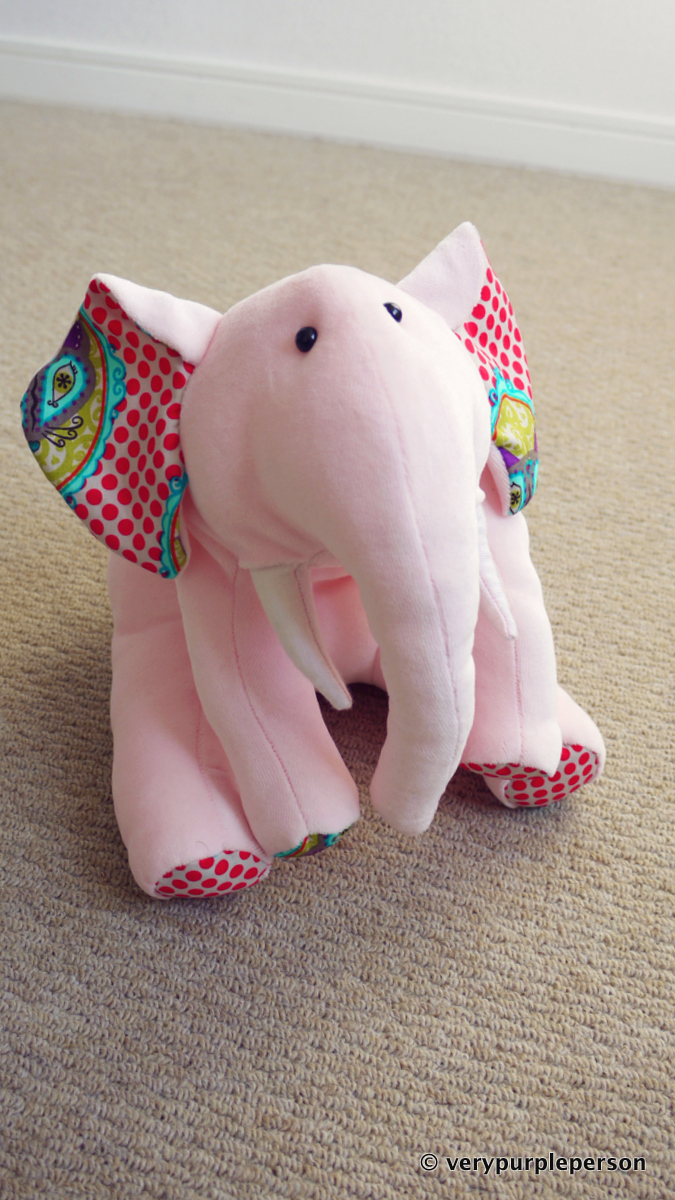 Have you ever heard of a wonderful project called Softies for Mirabel?

The Mirabel Foundation is based in Melbourne, providing help to children who have been orphaned or abandoned due to their parents drug addiction. Once a year, they collect handmade softies for the children so they can have a friend to snuggle down with. Before they were donated, the softies will be displayed for a week in the window of Meet me at Mike’s store. You can click the link above to read more about this wonderful project.

I have told Sidra several times that I was going to make something for this project, which he replied with somewhat disapproval grunts because Mama would be making toy that is not for him.

The fabric is very soft pink velour with leftover fabrics from Sidra’s jacket lining for inner ears and foot pads. The PDF elephant pattern is from my favorite pattern store, Funky Friends Factory, I’ve used patterns from this store before for this dinosaur and platypuses.

I think the elephant looks like cotton candy with ears and trunks! When Sidra saw it, he exclaimed that the elephant is so kawaii. He called it Baon-chan, because that’s how an elephant sounds like. “Ba-oooon!”

I explained that Baon-chan’s will go to a child who doesn’t have as many toys as him. This lead to a never-ending session of Q&A: Why the other child doesn’t have toys? Can’t her/his mama make them toys? What happened to her/his mama and papa? Does she/he have DS Nintendo and Playstation like me? Why doesn’t she/he have them? Will she/he get more toys?

When he was told that the other child won’t probably get many toys, doesn’t play DS Nintendo and Playstation, doesn’t have their mama and papa around, and maybe even has one or both parents already gone, Sidra seemed perplexed by all the answers. I guess it is hard for a child in Sidra’s age to understand that the world is not as beautiful as it is for him now. He knows about unhappiness, but he can’t imagine that there are children with unhappiness beyond that he knows. That there are children who are very unhappy. And that one day, he will be unhappy too.

I know he still wanted Baon-chan, he was holding her the whole day. But he also knew that Baon-chan was for that other child, so he stopped nagging me about giving Baon-chan to him. Looking at him holding Baon-chan like that, it might be easier to just give the elephant to him and make another for the project.

But he can always get other toys (and more) later, and I hope he will understand this. I let Sidra said goodbye to Baon-chan this morning before he went to school. When he come back later, Baon-chan would be gone.