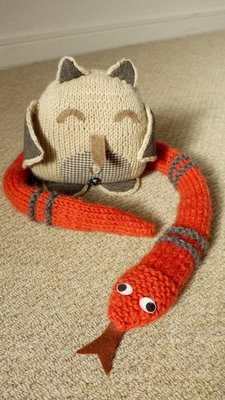 The Owl and the snake 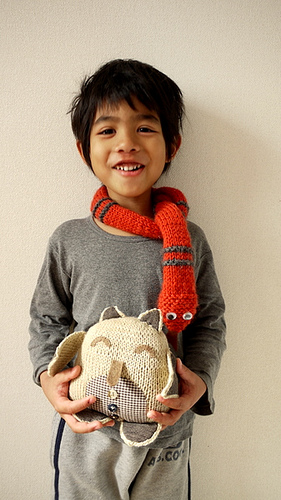 Sidra has been down from influenza and skipped school for several days. Today is the fourth day and he’s feeling much better, but the first two days were really bad, so he (and I) was really sad. To cheer him up, I knitted these two animals.

The snake is also a scarf, using the same wool yarn as Sidra’s red cable mittens. Because I only had one skein left, the snake turned out to be pretty short. The owl is knitted with the organic wool sent by Ms. N the other day. I used fabric scraps from Sidra’s shirt to stuff it. The fabric scraps are very soft and in the same colour as the yarn so it wouldn’t show, and I also don’t have to have fibres peeking out from the owl.

In the original pattern, the owl’s eyes were actually the other way around so it looks like sleeping, but Sidra turned the eyes upside down. He said he wanted his owl to smile.

Sidra is very happy with these two, so when he started feeling better, he made two houses for his new ‘pets’.