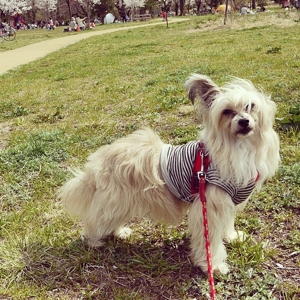 One year ago we met Fuwawa for the first time. She has lived as a breeding dog for the first seven years of her life until the breeder had to close down. Initially, the breeder wanted to put down all of their Chinese Crested dogs but fortunately they didn’t have enough money to do so. They handed all the dogs to the ARK shelter instead, who then sent Fuwawa to us to be fostered.

The first few days in our house, Fuwawa was still very nervous and spent most of her time hiding in her crate. She was debarked by the breeder so she couldn’t make a sound. I wonder if that is one of the reasons she looked so sad. When she got excited, she seemed to want to bark, but the effort often make her coughing.

After several weeks, Fuwawa has already trusted us and can get relaxed when we touched her. Dogs are wonderful creatures, they don’t hold grudges and always live in the present. Fuwawa still gets easily nervous when there’s a loud noise or too many people around. When she got scared, she would look at us for reassurance. I’m happy that she can trust human again.

We adopted Fuwawa after fostering her for a month. Now she spends her days sleeping on the couch. She is still not interested in toys or playing with other dogs. But I think as long as she’s feeling safe, it doesn’t matter what she does all day. She is a bit active when she just wakes up, then she would try to wake me or my husband by scratching our heads. Sometimes she plays too! She would circle around and run around the room in the morning. She also loves to follow me so closely that I often bump into her.

I hope she is happy with us and that we can have the opportunity to love her for a long time. Thank you for coming into our lives, we love you Fuwawa!

Sunny day at the park