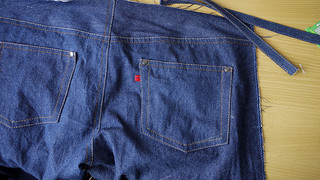 My sewing machine is broken (T_T)

That’s my beautiful Janome sitting sadly in my sewing room. Because it is broken! (T_T)

I was sewing a pair of jeans for my husband when the needle stopped because of some threads bunching under the plate. I tugged on the fabric to pull it out, then opened the bobbin case to clean it. I’ve done this many times, and usually it solved the problem.

Sometimes we don’t know how dependent we are to a material thing until it is broken. It’s just a sewing machine, but I always feel so depressed whenever there is problem with it. I think I can handle it if it was the stove, the fridge, or maybe my mobile phone, but not the sewing machine. Or the computer. Or the modem. Or the SLR camera.

I sat on the living room feeling all miserable yesterday, Sidra asked me what happened and I told him why. He hugged me and said that the sewing machine would be okay and we only need to have it repaired. If people saw us hugging each other like that, they would think that something really bad had happened to us.

So I guess I have to find something else to do until Saturday, when we’re going to take the sewing machine to the repair shop. Sometimes I miss sewing machines from older days, they were so simple without all the fancy stitches and blinking lights, but they are so much stronger and harder to break down. And even if there were problems, we can usually fix them ourselves because the machine was so simple.

This is the jeans that I’ve been working on when this catastrophe happened. The fabric is another Spring Top sewalong prizes, Indigo denim by Robert Kaufman that I got from Whipstitch fabrics. I was so happy making these jeans because I put rivets on them!

More fabric prizes that I got: Little Folks Voile Diamond Mine by Anna Maria Horner from Fashionable Fabrics (and red lining that I bought), Kaffe fasset shot cotton in Moor from Pink Castle Fabrics, and Robert Kaufman cotton corduroy in Camel from Whipstitch fabrics. So many things to sew…. (loooong sigh).