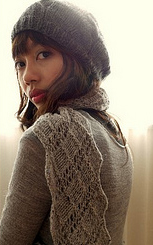 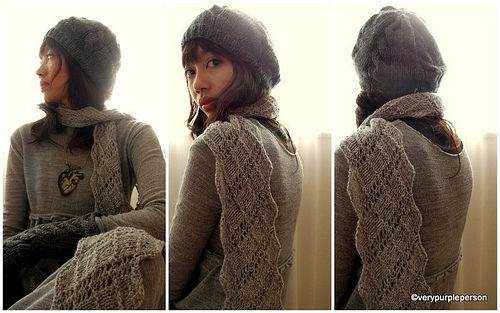 I finally finished the grey scarf that I mentioned in this post. The yarn is grey wool with little bits of colorful tweed on it, knitted in 3.5 mm knitting needles. So far, it is the smallest needles that I’ve used and it sure took a long time as I wanted a long scarf. At the end, the finished piece used up all three skeins that I had and is measured about 12×200 cm after blocking. I learnt a lot of things while making this scarf, and I must say that I’m quite proud with it, the lacey pattern is looking so pretty.

These wool yarns in 3 different colors were supposed to be Sidra’s sweater, but it turned out that I have no patience in knitting a clothing. The same row after row after row and after 6 rows (errr), I lost my patience. So I use the grey yarn to make a pair of mittens and a hat for myself.

The pattern of the mittens is said to be inspired by a pair worn by the female protagonist in the movie ‘Twilight’. I’m no fan of the movie and haven’t seen it myself, but the mittens are very pretty. The pattern is very nicely written and clear. These mittens also gave me the chance to learn using cable needles, that I haven’t ever used before.

The original pattern of the hat doesn’t have cables, but I add some because I really like those cables effects. Now that I can make it, I want to use it everywhere! Anyway, the hat was knitted up really quick and finished last night. Before blocking, the shape was really weird, a bit like stiff mushroom on my head and I was a bit turned off. But then I blocked it over a dinner plate, and it turned into this nice slouchy things.

Now I still have 4 skeins of white wool and one skein of the red. Maybe another hat? Too much hats? I believe one can never have too much hats.

What I did today