I finally finished my first knitting project, it’s a muffler for Sidra! 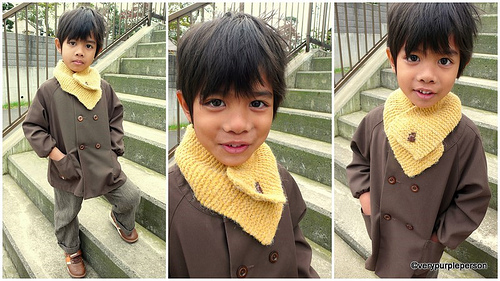 Actually, I still didn’t know what I’m going to make when I began knitting the yellow yarn. I was thinking of making a long thin scarf for myself. But Sidra saw me playing with yarn and ‘chopsticks’, and after observing the yellow thing dangling on the stick, he declared that whatever it was, it would be his. Okay then. 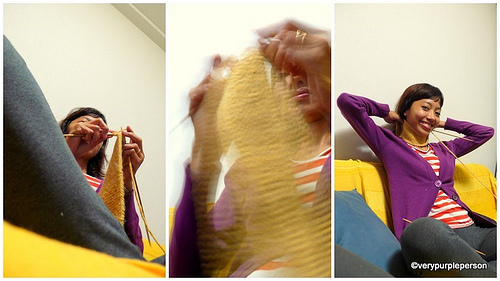 The completed muffler measured about 10×53 cm and it’s entirely in knit stitches. I’m still trying to get the hang of purl stitches (and other stitches). I managed to knit a buttonhole on one end (yay!), and put a kabuto-mushi button on another end. The muffler only use up one skein of the yellow yarn, which left me with another 4 skeins of it. Well, I still can’t estimate how many yarns are needed for a certain project, so I bought 5 skeins of yellow yarn. What am I supposed to do with them? 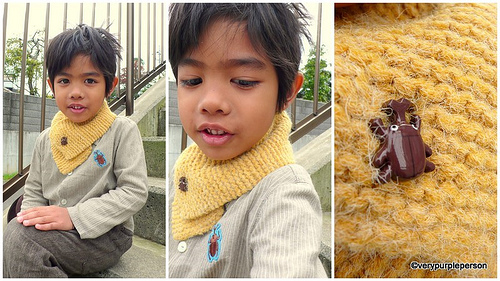 Sidra is considerably happy with the muffler, in spite of some wobbly stitches in several parts. Of course, he doesn’t care about it. I think it’s not that bad after all, for a first-time knitter like me. Now I want to go buy another needles, maybe some circular needles to make a hat. Or more knitting needles in several sizes. And more yarns. Yeah, this is killing me.