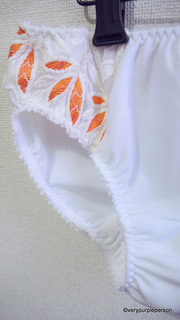 Today I finally tried my hands on lingerie making. I still have to finish the bra but I’m already too excited not to share the pretty panties now!

I’ve been wanting to learn to make my own lingerie but always thought that they were too difficult. I’ve made several cotton panties before, but not something as ‘serious’ as bra and lace panties. Until one day, a nice lady named Millie left a comment in one of my post, which led me to to check out her blog, where I found this inspiring post about the basics of bra making. One thing really led to another, internet is such a wonderful thing, isn’t it?

Millie also has put together a comprehensive list of interesting and useful links for bra making, where I found ElingerieA, a supply shop that sells lingerie supplies. After several days of obsessing over bra and lingerie stuff, I finally bought the Bra kit white/mandarin and a bra pattern that will be posted later. These panties were made with supplies from the kit but the pattern was bought from Merckwaerdigh at Etsy.

I was very anxious before cutting the fabric and the pretty lace, afraid of making unbearable mistake. But everything went well, and sewing the panties turned out to be not as difficult as I have imagined. This one was finished in under an hour. I still made a few mistakes though, like not setting the right stitch length, but nothing too fatal.

How about the fit? I wish I was brave enough to show you, but this time I can only offer you my words, the panties were perfect! Not too mention that they were oh so beautiful. Next I will go to the more difficult stuff, bra making. Hope it will turn as pretty as these panties!