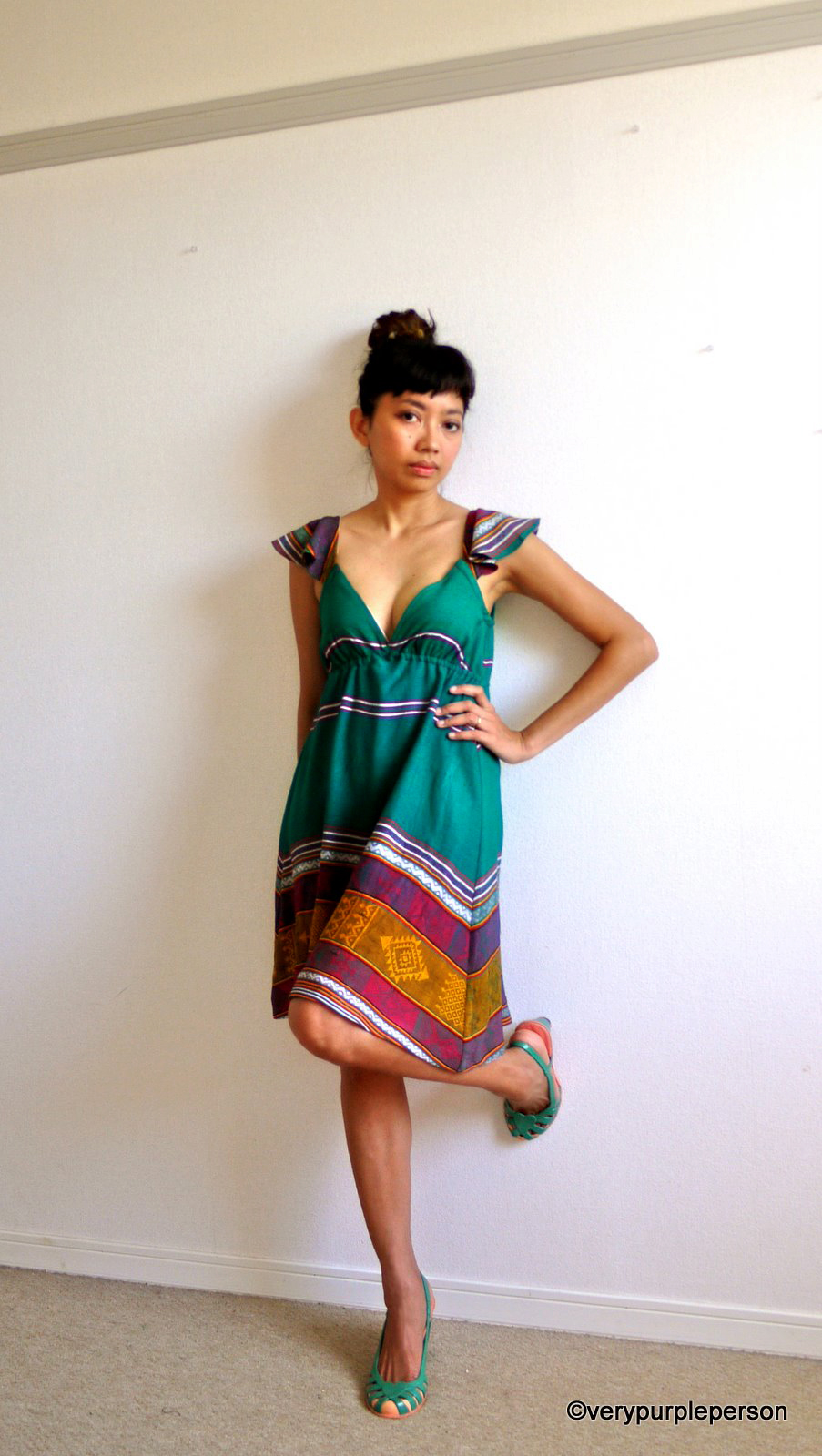 Tara is one of the most popular Burdastyle pattern and yesterday I decided to give it a try. It is a top pattern, but as usual I lengthened it to make a dress. The green fabric is another vintage fabric from my mother, it is now pretty old and has a lot of little holes. As it is a traditional cloth from one of the area in Indonesia, the width and length were a bit unusual. I apologize that I can’t remember exactly what area it was from, there are really a lot of areas in Indonesia, each with their own culture and traditional cloth.

Anyway, the pattern is very simple and I really enjoyed making the dress. Everything went smoothly, I cut the fabric and start pinning and sewing. Pin and sew, pin and sew, la-di-da, la-di-dum. And a couple of hours later, I’ve got myself a pretty green dress. I made it in size 32, didn’t make any alteration other than lengthening it, and the dress fitted perfectly. I really like it although the neckline was rather low, but it was expected. Now I understand why it is so popular in Burdastyle.

I hung the finished dress on the wall, it looked very pretty there. When the night came, I lied on my bed and looked at my new dress in satisfaction. But… wait a minute! What is that? Why is the color on one sleeve different from the other? I took a step closer and inspected the dress. Then I found what was wrong with it. One sleeve has the right side of fabric, but the other sleeve has the wrong side of fabric on it!!

It turned out that, in my ignorance, I just assumed that both sides of the fabric were the same, no wrong or right side. Well, it was a traditionally weft cloth, of course it has wrong side, duh! The wreck didn’t stop there, the back skirt of my dress is also sporting the wrong side of the fabric. The dress is doomed.

Now with one sleeve, I might unpick the stitches and start over. But the whole back skirt? I might just cut another fabric and start another dress! How could I do such foolishness? I’ve cut it carefully, look at all those matching stripes! Then I pinned and sewed happily (note to self: when sewing, focus on what you’re doing! No la-di-da, la-di-dum!), tried it on several times, ironed it, and it took me several hours after the dress was finished to realize that something was wrong! Aarrgh.

My husband came back from the office to find me sulking in the bedroom. I told him about the dress, “Look! Can you see what is wrong with the dress? It’s so obvious! What should I do about it?!” Realizing that he was being put in difficult position where any answer could be interpreted wrong, he took some time to inspect the dress and spoke in as soothing tone as possible. “Well, umm…,  maybe you can pretend that you did it on purpose, you know, it’s the design or something?” Can I? No, no, no, that’s unacceptable.

In these pictures where I wear the dress, it might look okay. But in real life, the mistake is so obvious! Or at least in my eye it looks so obvious. I have ruined this pretty fabric. Boo-hoo. 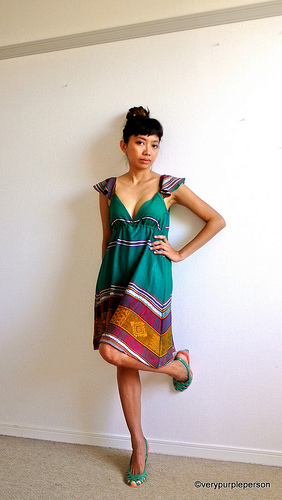 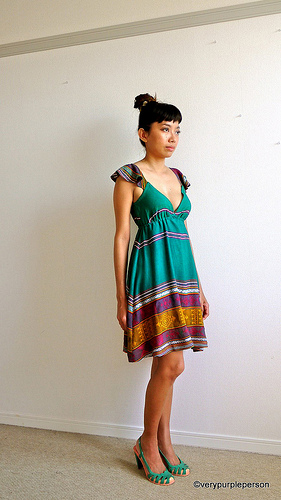 Making a mistake is one thing, but accepting the mistake is another thing, the difficult thing. I guess I have no choice other than accepting it. That this pretty dress with perfect placement of stripes and neat topstitching in red thread, the dress that fits me oh very lovely, is so ruined. I will put it out of my sight and make another one because I love this pattern. And I will be very careful this time.

The thought kinda puts my mind at ease. At least for now. Thank you for reading my failure!

Pattern is Tara from Burdastyle.