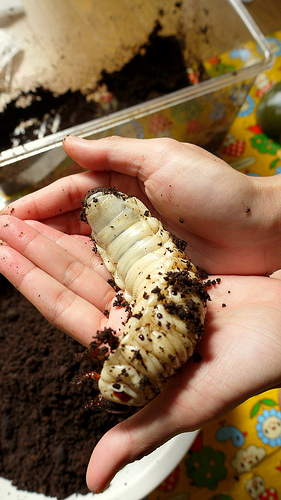 You know, we actually have pet in the house, although I rarely talked about it. But we’ve almost never seen it around because it is living in a plastic box buried under a heap of soil. In fact, it hardly can be called a pet at all, because we can’t, you know, pet it or play with it. The only thing we can do is watching it while it’s growing.

Anyway, meet our pet: a Colombian Hercules beetle larva! Sidra calls it ‘Herakuresu’, which is simply how the word ‘Hercules’ said in Japanese. He’s crazy about all these kabuto (rhino beetle) and kuwagata (stag beetle), so my husband and I finally agreed to have one.

It was bought last August in a beetle store in Shibuya, the store owner said that the larva was *maybe* a male. He showed me how to differentiate the male from female by looking at some spot on its tiny belly. Although he said that there was a certain thing to see there, I have to admit that I couldn’t see anything. So I hope this larva would really turn out to be a male. Because male Hercules beetle will have this most impressive long horn. It is said that an adult Hercules beetle can reach more than 15 cm in length. A 15 cm length crawling insect! How cool is that!

The larva is a pretty low maintenance animal. A container is filled with some special soil and then the larva is put there. It will consume the soil for about 3-4 months until the soil is changed to new one. This should continue for several month, and sometimes years. Then one day the larva will suddenly decide that the time has come to begin a metamorphosis process, it will stop moving and eating for a certain time, and then emerges as a cool, menacing-looking beetle.

While it’s living buried in soil, sometimes a glimpse of the larva can be seen when it stays near the side of the container. The three of us often take a peek together and comment on how it has grown so big or how it moves around etc. My husband is not an ‘insect person’, but he’s grown to love this larva. Although he still doesn’t want to tough this wriggly thing, he would check the temperature and humidity of the soil before he goes to bed and adjusts the lamp or sprays some water when necessary.

Because the soil is only changed every a few months, the occasion is something that we wait for excitedly. I would dig the larva and pick it out, then all of us would scream at the sight of the larva and how big it has became! So far, we’ve done it twice. I hope the larva will turn into a beetle this year, although I will miss this fat wriggly thing.

Searching for Meaning in a Throwaway World