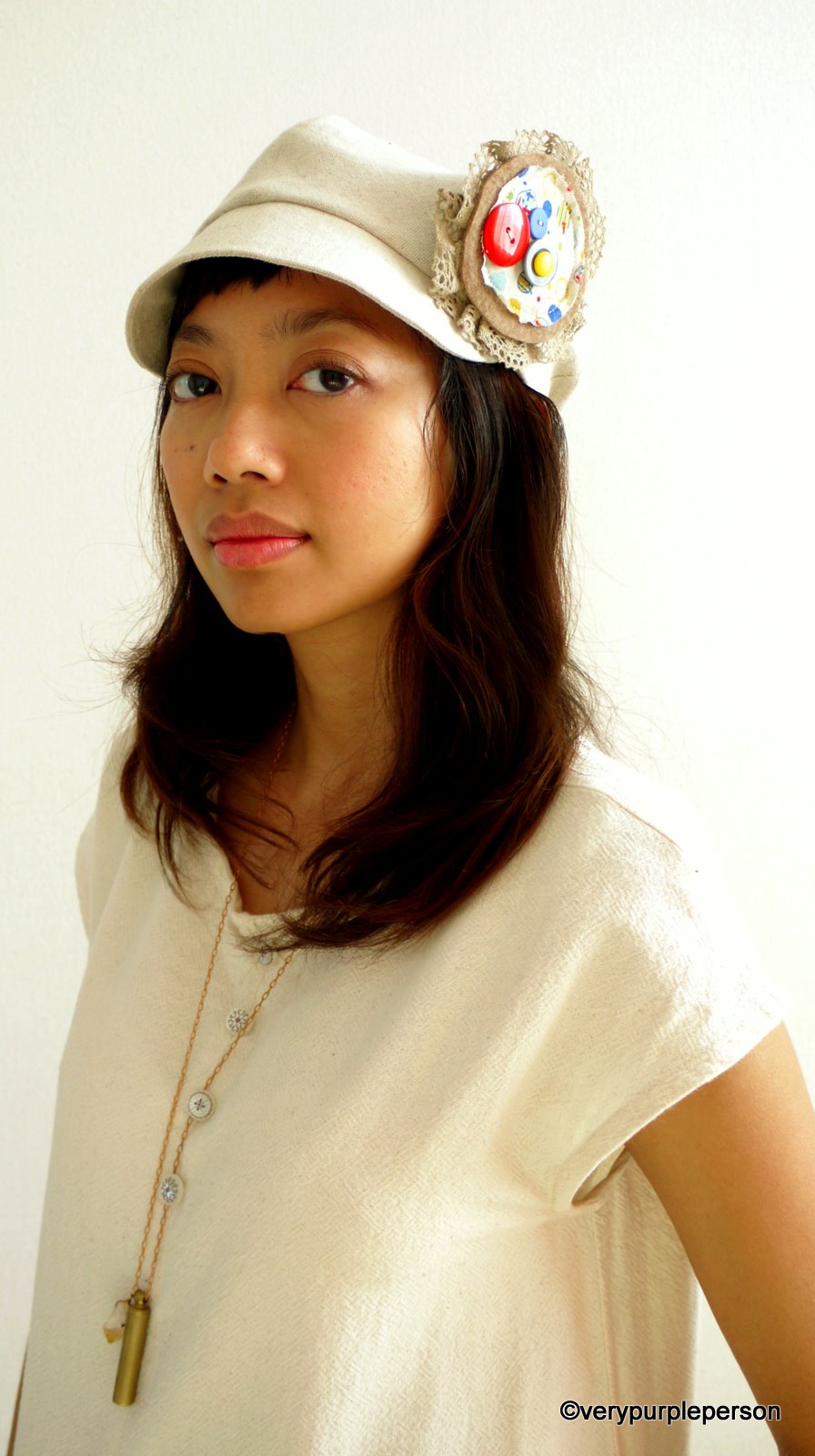 A friend of mine just got an operation done on her head. She had to have all all her long hair shaved and stayed a long time in the hospital. I decided to make her a hat, hopefully it will cheer her up. 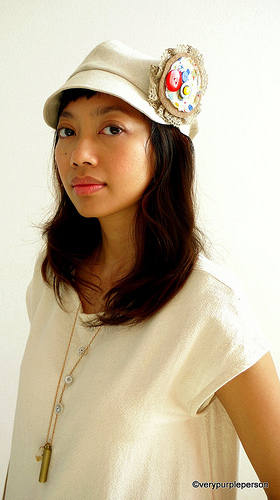 Initially I wanted to knit a cap, but apparently my knitting and crochet skill has gone back to zero, so I made her a fabric hat instead. 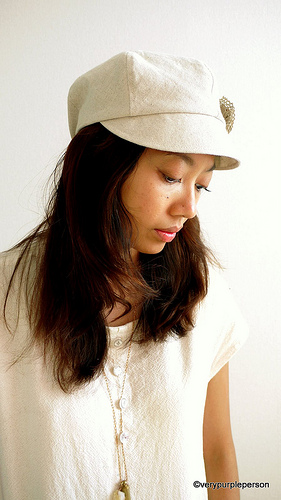 Sometime ago I’ve made these denim hats from the book ‘Idea Hat Recipe’, so I looked for other patterns in it. The concept of the book is hats that inspired by cakes, a weird concept but the hats are indeed pretty cute. The pattern that I chose is called Macaron thé russe, which is actually a cap with tilted down brim. The fabric is linen with printed cotton for the lining.

Note about the pattern: I didn’t add seam allowances to the pattern as it seemed big, then I sewed it with 0.8 cm allowance. At the end, the hat still needed some elastics sewed at the back to make it fit.

I added a detachable brooch from some lace, fabric scraps, and buttons. Actually I wanted to make a flower brooch, but then changed it to this simple and easy round brooch. Or maybe I was just lazy.

Then I tried putting it on. The hat was looking okay, but suddenly I didn’t think it would be the right hat for my friend. There is no way I could give this hat to her! What was I thinking? etc. So I decided to make another hat. I don’t know, sometimes I get freaked out like that. Making things for other people is frightening, I’m always afraid that they wouldn’t like it. 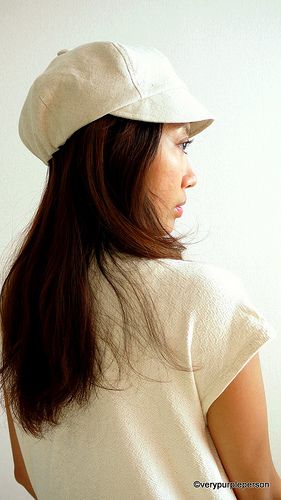 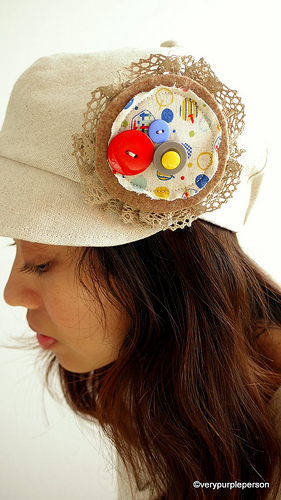 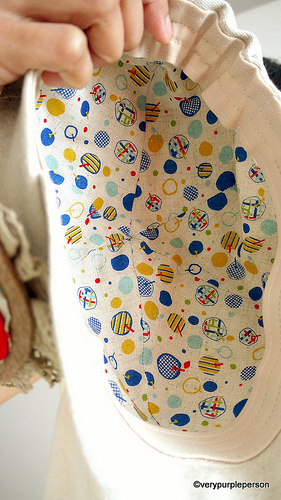 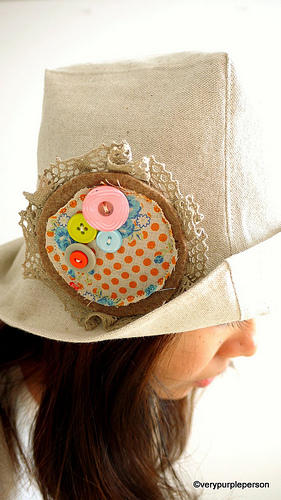 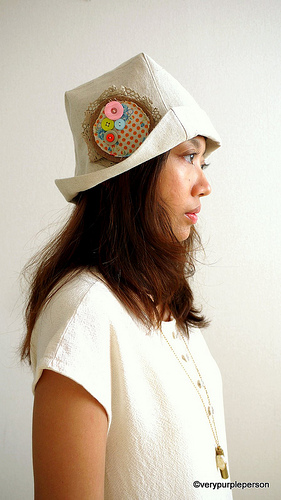 I went back to the same book and chose Mousse de pêche, a rectangle-based hat with folded brim. The fabric was the same as the first hat, with different pattern of print for the lining.

The brooch was made with the same method as the first one. Despite looking  a bit complicated, sewing a hat is actually much quicker than sewing a top or a dress. I finished both hats in just a few hours, making the brooches took longer than the hat! I put on the second hat and this time I approved it. It doesn’t mean that the first hat is worse than the second, it just doesn’t feel right.

My friends and I went to visit her today and she liked the hat! She said she would wear it to go to a nearby department store. I’m very happy now, not only because she liked the hat, but also because she looked very strong and happy. The operation has affected her vision so she couldn’t drive any more, she said that next time we should go to places by bike together. She’s such a strong woman! 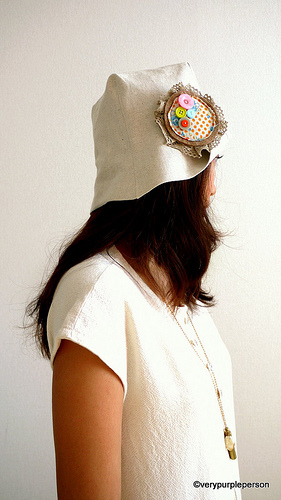 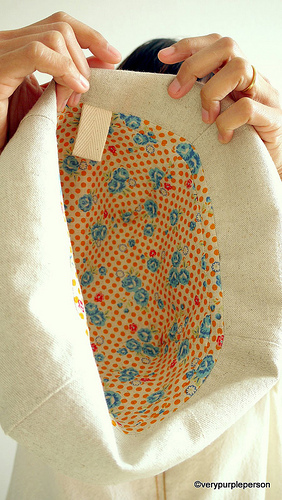 Patterns are from the book ‘Idea Hat Recipe’.