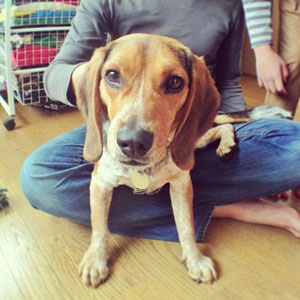 If you’re following me on Instagram or Twitter, you’ve probably noticed a new face that recently popped up there. Meet Monte the Beagle! He’s a 10 month old beagle that we are fostering since last weekend.

Whenever I think about fond childhood memories, there’s always dogs in there. They were part of my happy memories.  I remember them all, every physical traits and unique characters. Some of them were pure-bred, some were mutts and strays that I found on the street. Some died of accidents, illness, and old age.

I stopped having dogs since Sidra was a baby because I was moving quite a lot then. But there is always this dog-shaped hole in my heart. Last year we finally moved to our own house and hopefully would stay for a long time, so I start thinking of having a dog again. Sidra has also been asking for a dog. He loves animal as most child does.

My husband never had dogs in his life, he grew up with cats. He said that he didn’t know anything about dogs, and was slightly afraid of them. It is actually quite common in Indonesia, dogs are rarely seen walking in public places and lots of them are kept behind fence so they tend to bark at people. For people who are not familiar with dogs, this creates the mindset that dogs are aggressive creatures. But after more than 10 years living in Japan and meeting dogs in daily basis -most of them are well socialized-, my husband becomes more relaxed toward dogs. Not to mention hearing my endless tales of the dogs from my childhood.

The three of us talked about having pets, and everyone is preparing themselves for the responsibilities of taking care of a dog. I proposed the idea of fostering first, so we can have the experience of taking care of a dog and see if it is really suitable for us. I wrote to ARK (animal Refugee Kansai), a non-profit, private organization for rescuing animals, to volunteer as a foster family. And here comes Monte the beagle! Can you believe that he was abandoned in a parking lot?! 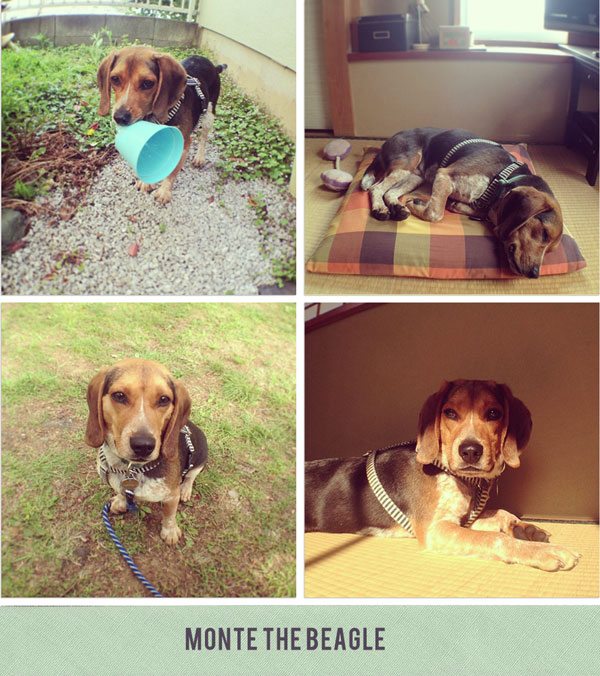 Monte was quickly getting friendly with us, only cried once when he saw his caretaker left. He already knew to pee on the pee sheet or outside, but we still had several ‘accidents’ these past couple of days, maybe because he’s still adapting to the new house. At night, we put the crate in the bedroom and he slept there quite peacefully, woke up around 5.30 am and asked to be let out. He got super excited when Sidra’s friends come and they were as equally excited so the house was a bit of a chaos after school. Monte is still pulling on the leash when I take him for daily walks and barking when he is left alone, so we have to work on those.

Of course there are sacrifices, tatami floor and dogs are not quite a good match and we have prepared ourselves to it. There are wiping floors several times a day, especially after an ‘accident’, taking care of the waste he leaves during the walk, the dog smell on the furniture, and so on.

Our life schedule is changing, we have to wake up earlier for the morning walk and I can’t leave the house until Monte learns to be alone. I’m happy to say that everyone doesn’t mind the little damages that have started occurring around the house and adjusting to the new life schedule.

Surprisingly Monte and my husband quickly took a liking to each other. My husband said that he didn’t know that having a dog is quite a happy experience. He browsed the internet everyday reading about dogs now. Sidra has already thought of Monte as part of the family and he gets all misty-eyed when I reminded him that Monte is a foster dog and we have to be prepared when he leaves. I don’t know yet if we will finally adopt him or not, it still remains a big decision that we have to think well in the future.

If you’re thinking of having a pet, please consider adopting. If you’re in Japan, you can see these beautiful dogs and cats in Osaka and Tokyo from ARK.