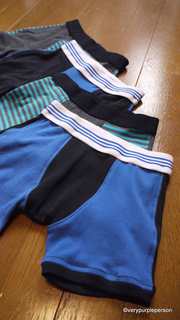 It’s kids clothes week spring 2011! I’m starting it by refashioning Sidra’s T-shirts into undies. Those shirts are still in good condition but all of them have become too small now. It is something that you always encounter when you have kids.

I copied one of Sidra’s undies to make the base pattern. Then I made a pair of test undies from old T-shirt so Sidra can tell me what he wanted to change. Yes, I made a muslin for recycled undies…. He wanted his undies to be a bit longer and not too tight around the bum, so I altered the pattern accordingly.

The original undies actually doesn’t have those side strips, the front and back pattern are in one piece. But the T-shirts were too small for this, so I added the side strips to the pattern. I think it looks even better, kinda like cycling shorts. As usual, I only use ordinary sewing machine to make them. I used zigzag stitch set on 0.5-1 on width and 3 on length. It works perfectly!

The black elastics were recycled from my husband’s underwear, while the white with blue stripes ones were found in a tiny fabric store near my house for about 1US$ for 2 m. It is such a cute little store, selling fabrics and sewing notions who are mostly out of print and only in small quantity. The racks were dusty and some of the fabric look like they’ve been there forever. For some reason, there were two racks for household supplies like spoons and forks, nail cutters, plastic combs, erasers, etc. The owners are an old couple who loves to chat, even when they know I don’t understand Japanese. They just keep talking and I keep nodding and smiling (^_^;)

Anyway, I showed the undies to Sidra when he came back from school. He loves them and wear the blue one right away! Now that he’s out of T-shirts, I think I need to make some T-shirts for him. 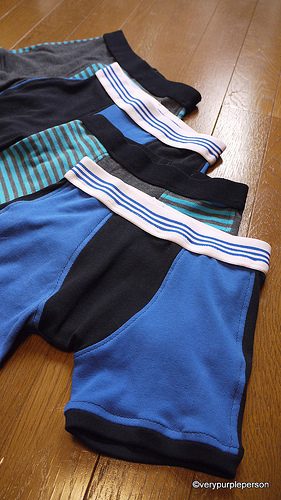 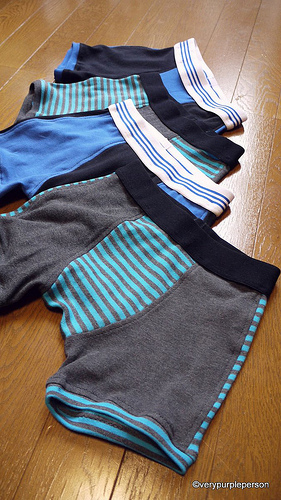 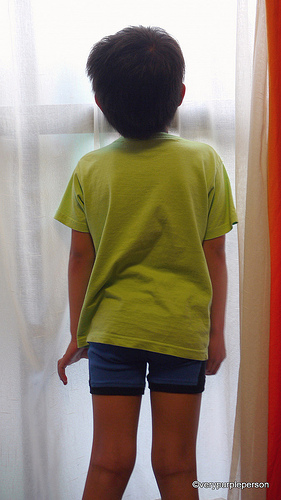