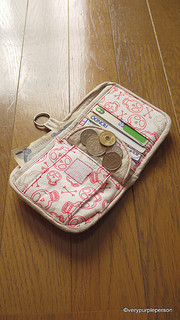 The last time I made a wallet for Sidra was three years ago when he was still in kindergarten. It is still in good condition, but Sidra asked for a new wallet with coin pouch because his coins often fall off his wallet. So this is (maybe) the last thing I sew before we leave at the end of this week.

I didn’t really feel like making my own pattern, so I browsed around and found this PDF tutorial for Bi-fold wallet with lace from Napkin pattern at Etsy. The tutorial was emailed just a day after I paid. It was 25 pages (!) of tutorial with pictures. I find the number of pages was a bit too much as I don’t like printing that many pages for a wallet tutorial. But the tutorial is very clear and explained well. I think it is better to open the tutorial in a notebook and bring the notebook to the sewing room. Or bring the sewing machine near the computer. 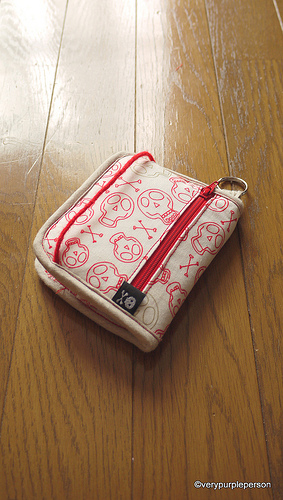 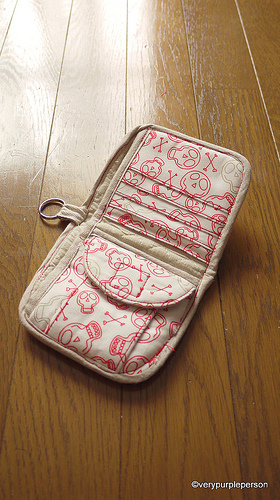 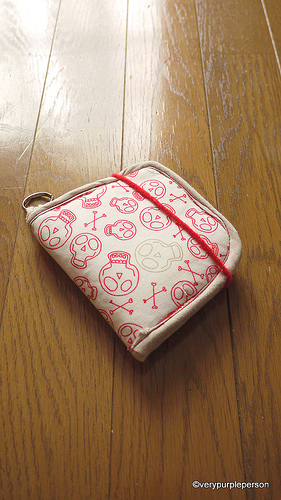 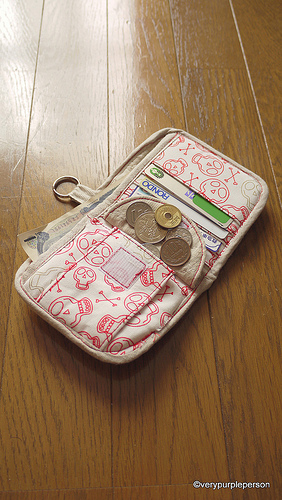 The coin pouch will be used often and boys don’t usually have the patience to deal with metal snap-on buttons, so I used velcro for the flap. I also omitted the tab closure and used elastic band instead. The fabric is white cotton/linen with red skulls pattern, the same fabric as the pocket linings on Sidra’s skull and cross pants.

The bill compartment is ready-made quilted cotton in natural color and the bindings are linen twill tape and bias tape. I skipped on the lace of course and changed it into a zipper, also added is a little tab with metal ring so Sidra can later attached a lanyard to the wallet.

The sewing quality is not something to be proud of. You can see that I’ve missed several parts and the stitching lines are wavy. Maybe I should have used properly interfaced fabric instead of quilted cotton, or maybe I should take more time in making it.

Anyway, the boy is very happy with his new wallet. When I apologized for the imperfection, he declared, “But those imperfections are the ones that make the wallet better!” I guess he has talent for sweet talking.

PDF tutorial is Bi-fold wallet with lace from Napkin pattern at Etsy.

A couple of dresses