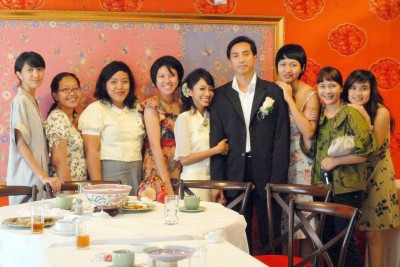 Today is our second wedding anniversary.  Sometimes it feels like we’ve been together for a long time, but sometimes it feels so fresh and new. Since it’s our special day, I would like to share a short story about us. Maybe not that short.

The first time we knew about each other was in 2006. He was already living and working in Japan, while I was busy with my own little life in Indonesia. That year, he often exchanged emails to a certain friend, and one day they happened to talk about books. As it turned out, that certain friend happened to be my ex-officemate, and she told him about me and my novel. You’ve probably known that I published a novel in 2004 (see #5 here).

He got a bit  curious, and the easiest thing to do for a programmer when he gets curious about things is going to Google. So he googled my name and found my blog. Not this blog, but my old writing blog in blogspot. For several reason, it is set into a private blog now. He liked what he read there and proceeded to send me a fanmail. In fact, the subject of his email is ‘fanmail‘.

I remember reading his first email at the office and showed it to my friends. His email was short and witty (at least for me, but my friends said that it was witty too!), but I didn’t really think much of it. I made a short reply and drag the email into my, uhm, ‘fanmail of the book’ folder in my inbox. Don’t worry, there are not that many fanmails in that folder!

That was the beginning of our online friendship. We didn’t write that much, just two or three short mail every month about life in general or our opinion about things. Somehow, we rarely talked about ourselves.

He stopped writing a few months before the end of the year, so I thought that was the end of the friendship. But in the new year of 2007, he sent me another email and we resumed writing to each other. This time, our mail were getting longer and longer. Once he sent me a 20 paragraphs or so (six pages when printed) of how interesting quantum physics was! Zzzz…. We began to write about ourselves, family, what we do everyday and little stuff like that. We also talked about music, and shared songs to each other.

The number of the mail kept increasing, and along with that, a certain feeling was appearing. Maybe we have had the feeling since the first time, but it was denied because we thought that it was impossible due to our situation and places. We never talked about the feeling, but we sent songs and drawings that somehow relate to our feeling. We didn’t even chat, everything was by email. Because we wanted to be subtle. You can see some of the subtle pictures here. Yes, they’re so very subtle (-.-)

It really felt like everything was spinning around us faster and faster and there was no way to stop it. Finally, he announced that he wanted to go to Jakarta and meet me.

We met in a cafe one morning, one and a half year after his first email. I looked at him and that was how love must have felt. We sat and talked and suddenly the morning had already turned to afternoon. Seven months later, we got married.

Preparing the marriage was not easy with him in another country. He could only come about 2 weeks before the wedding, so we discussed everything by emails, chattings, and shared numerous documents on Google docs.

My best friend accompanied me going to meet people and browse through stuff. Another best friend, a designer, made me a wedding dress and a suit for Sidra. In the meantime, my husband drew all the invitation cards and maps in pencil and watercolour.

I can’t go on without mentioning the one person who helped us a lot with the wedding. He took care of all the paperworks needed for the wedding, it was something hard for me to do by myself because the procedures in Indonesia are difficult and the rules are sometimes vague. I’m never good at negotiating things, but he’s a natural. He’s another best friend, Sidra’s father and my ex-husband. We had gone through a lot and ended up being good friends now. He also came to the wedding.

More friends were helping us making it happen. My makeup was done by a wonderful makeup artist who is a good friend, and the wedding photographer is also a friend. I guess having worked in a fashion magazine has its own advantages. Others helped by being in the venue since early in the morning and ushered the guests to their seats. They were all so wonderful!

The wedding party was small and intimate, everybody was having a good time (plus a little tears) and the food was perfect. Our wedding car was a bit unusual, it was a bajaj (3-wheel ‘taxi’), decorated by several friends. The trip from the venue to our hotel was priceless, people were pointing and taking pictures of us ^.^

Today, two years ago, we were pronounced husband and wife. I know life is not a happy-ever-after story and two years is just a short time. But I’ve learnt to live day by day and here I am today in a completely different life, and still as happy as I was that day. Maybe even happier ♥♥♥

Thank you for reading another story of my life!
[album id=1 template=extend]