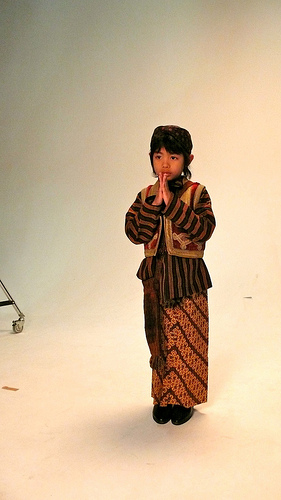 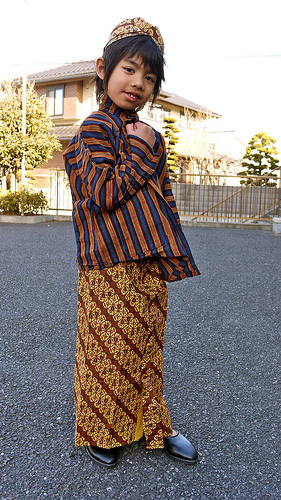 About a week ago, Sesame magazine (a Japanese kid’s fashion magazine) contacted us and invited Sidra for a photoshoot. This is the second time Sidra had a photoshoot with them, the first one was done in Tottori, just two months after Sidra and me moved to Japan. This time, they wanted to photograph Sidra in traditional costume. So I asked my mother to send a Javanese costume set from Jogjakarta, Indonesia.

The package came very quickly, it was wrapped in white plastic sheets, handstitched with blue plastic rope. I wonder whoever in the Jogjakarta post office with the job of handstitching those overseas packages. Actually I kinda like the package, it looks like something that I might get from an Etsy seller.

The Javanese clothes set has a long-sleeve top called surjan, made of lurik, a type of traditionally-weaved striped fabric. The headdress is called blangkon, made with batik. It was too small though, but fortunately Sidra had another blangkon that we bought last summer in Indonesia. The set also has a pair of leather slippers called selop. The bottom part is batik cloth, but it has been modified with front zipper and slit for easier wearing. Sidra was a bit hesitant when he saw it, he wondered why he had to wear a skirt like a girl (^.^;).

Anyway, I asked my sister how much the set costs, and she said that the whole set cost about $7! Well, of course the quality is nothing to be talked about, so I kinda altered it a bit, made a neater hem here and added some snap-on buttons there. But hey, it looks good!

The photo shooting was done yesterday in Sesame magazine studio, with a bit of drama because I forgot to bring the shoes and my poor husband had to go all the way home and get them. I’m so sorry, darling! Anyway, the Sesame magazine people were very nice, they added a vest, beaded necklace, and a bag to the outfit. 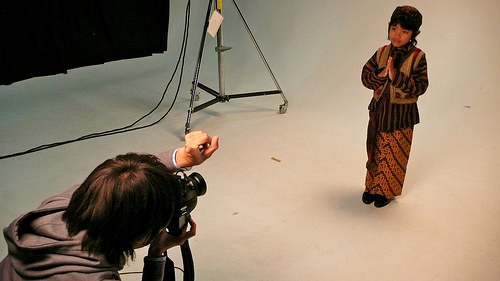 I took several pictures of Sidra in the Javanese clothes when the package has just arrived, and he posed around happily. But once placed under the bright light in the Sesame studio, Sidra seemed to get shy and a bit reserved in the poses. Well, I guess there’s a big difference between getting your picture taken by your own mother  and a professional photographer. But he did his best and I was very proud of him. But of course, Mama will always be proud of her little star!  ♥♥♥(^.^)

At the end, Sidra really likes the clothes that he’s wearing it to school today. Only the top, we left the skirt part at home!

My sewing machine is broken (T_T)