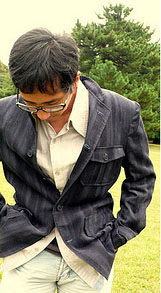 I almost can’t believe I finally finished it! This jacket is supposed to be my husband’s birthday present, but I miscalculated the working time. His birthday was last Monday, and I’ve forgotten that there would be two days weekend before that, in which I wouldn’t be able to sew. And I couldn’t sew on Monday too because Sidra had one school day off after the Sports Festival.

The pattern is The Stinchcomb, downloaded from BurdaStyle, and after printing it, I ended up with 67 A4 pages that I was supposed to tape together. The whole living room floor was covered by them. 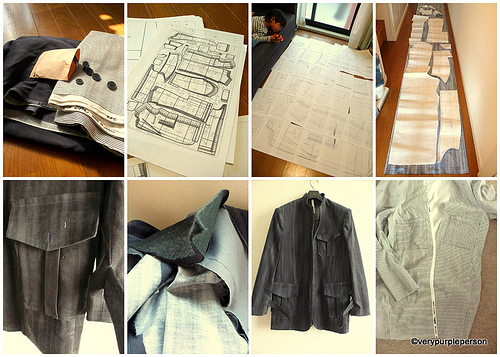 To make my life even more complicated, I decided to alter the pattern. The jacket collar is changed to stand-up collar, thus the front opening is changed and more buttons are added. The pockets are changed too, and the sleeves slits are eliminated.

Laying up those patterns on the fabric was another problem. I had to do it in the hallway because that’s the longest place in the house. Well, all I can say is, cutting 5 meters of fabrics on the floor doesn’t do any good to your back. 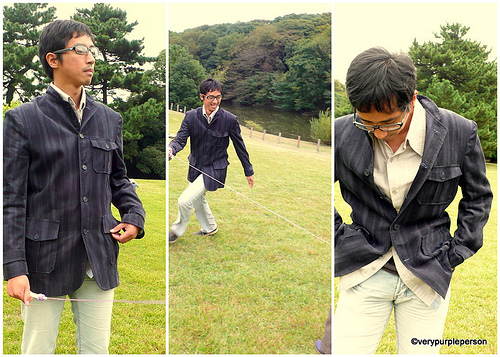 The fabric is blue corduroy that I bought from Okadaya, Shinjuku. It has subtle stripes in different hues of blue, giving it a somewhat worn appearance. The lining is double-gauze cotton in tiny stripes of black and white.

To my surprise, sewing it was not as difficult as I’ve imagined. Sure, the pieces were a lot, but I just had to piece them one by one and they magically transformed into a jacket. 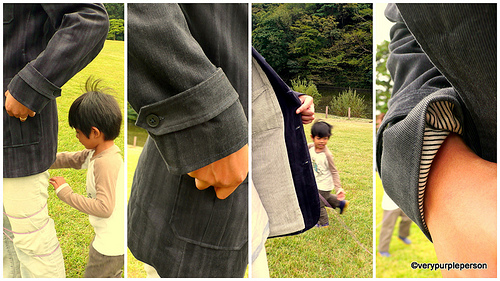 Anyway, it was only two days late, so that wasn’t so bad. And the better thing is, my husband really loves the jacket. He has already requested two more jackets. Anything for you, darling.

Pattern is an alteration of The Stinchcomb from Burdastyle.

———–
Once upon a time, maybe not too long ago, someone wrote to me:
“There is almost zero possibility that we would accidentally bump into each other.”

We really had no idea.